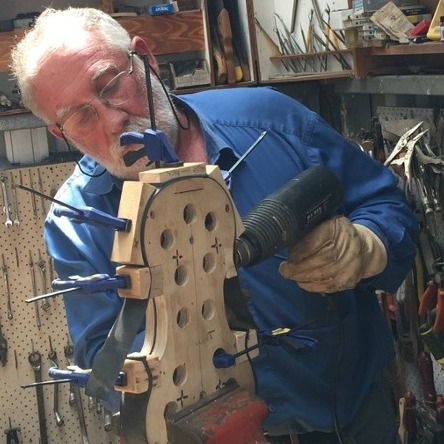 Chris Henderson has been making things since he can remember. Now retired he has had three careers, as scientist, engineer and doctor. Much of the enjoyment Chris gets out of life is in finding a way to make and understanding how things work: from brain science to disease, houses to shoes, and now kelp violins.

This all started when Chris saw a kelp violin made by his friend Roger Bodley. Who in turn was challenged by Emily Sheppard, a professional violinist. Emily had made a kelp resonator for her violin, showing it to Roger after a performance. Roger then made a couple of violins and showed them to Chris.

Chris thought the problem of making a violin out of kelp was difficult enough to be worth thinking about. He set about making a violin in the classical tradition, having been taught the craft by John Ackerman, a luthier in Howrah, 15 years ago. Getting a piece of kelp to sound like a violin took months of development - and mistakes. Gradually understanding of the material and how to work with it developed into three finished violins. Excursions into the mathematics and physics of the violin were part of the journey. Resulting in an instrument that sounds like a traditional violin, but with its own characteristics. The ‘voice’ of a violin depends on many factors, most of which kelp simply doesn’t have, but the aim is not to make a wooden copy, but an acoustically strong kelp instrument with its own sound.

The Kelp Violins are exhibited as part of Organology.